The Malkavian are a prominent clan. With their unique e discipline beside the excellent oa disciplines, plus some really good vampires, they have led to many archetypes. Lutz Politics and Rachel Madness are two archetypes revolving around the powerful vampires Lutz von Hohenzollern and Rachel Brandywine respectively. On the other hand, Malkavian and their antitribu are also used into two strong weenie constructs: Weenie DEM and Weenie AUS.

Group 1 Malkavian have the doa disciplines combination, making them the only vampires of the game with do as clan disciplines. That got them into other archetypes, like the Mind Rape archetype, using Mind Rape to take control of opponents vampires. Malkavian and their antitribu got e instead of d on group 2 to 5, an evolution right on tracks with the roleplaying game Vampire: the Masquerade. They got d back on group 6 with the release of the fifth edition. 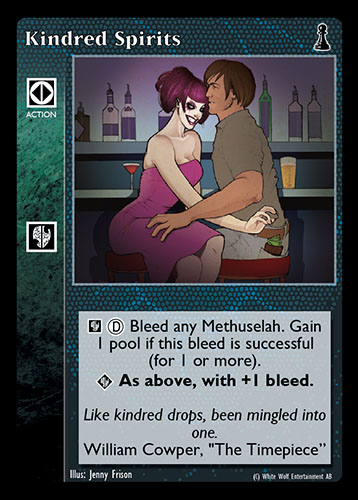 This bleed action is central to the e discipline. It can deliver a bleed of 2 in combination with a 1 pool bloat. Moreover, the bleed can be directed to any Methusalah, not only the prey, offering additional table control. 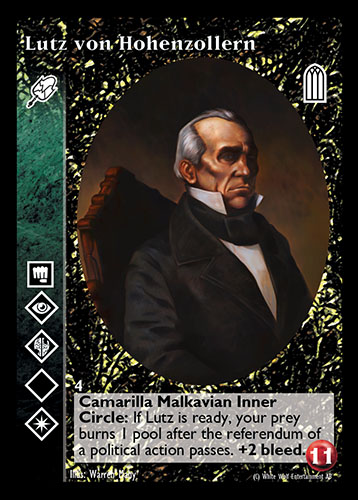 Star of the Malkavian clan, he has a really powerful ability, 4 votes and +2 bleed like many Inner Circle, combined with all clan disciplines plus the useful R that gives acces to excellent vote modifiers like Voter Captivation. 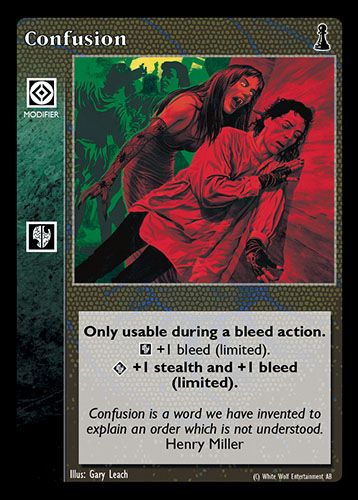 An excellent bleed modifier at no cost, it provides stealth at superior E. 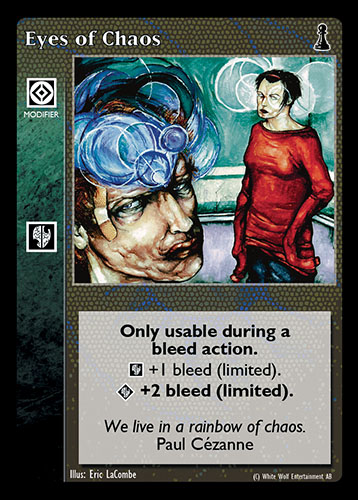 A powerful bleed enhancer at no cost, although a bit less efficient than Conditioning. 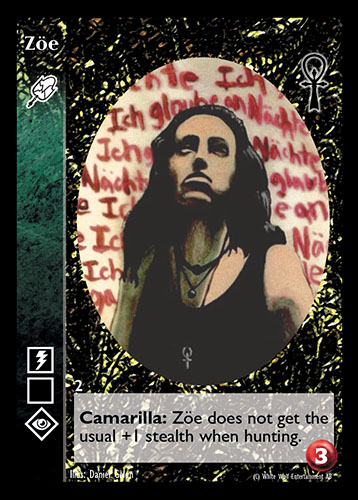 Superior A at 3 pool is really a bargain. She has access to Telepathic Misdirection for the cheapest price. 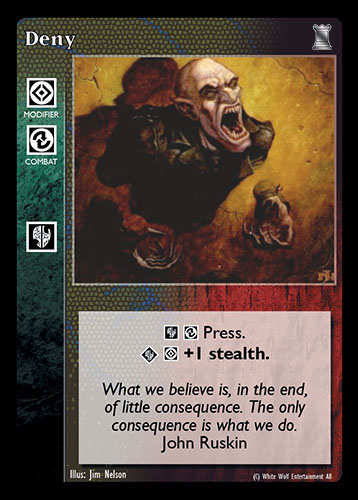 A good stealth enhancer at superior E, its inferior ability is seldom used but can still come in handy to get out of a Trap, for example. 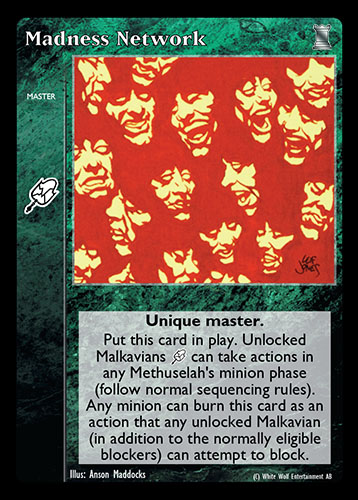 A rare effect for this infamous clan card. It enables Malkavians to stay in defence and only bleed at the end of their predator's turn, but it can also be used to act multiple times during the successive turns of other players. I can become a cornerstone of the deck when combined with other tricks, like Homunculus or Reversal of Fortunes. 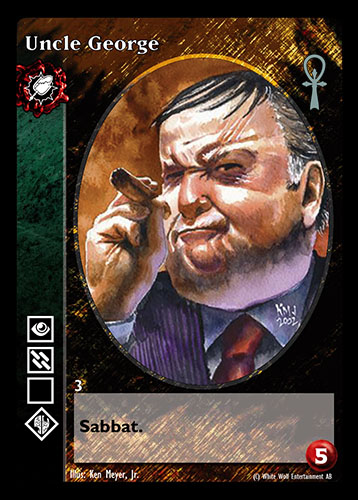 5 pool is a good price for the Eo combination. He is almost always paired with Persia in stealth & bleed constructs. 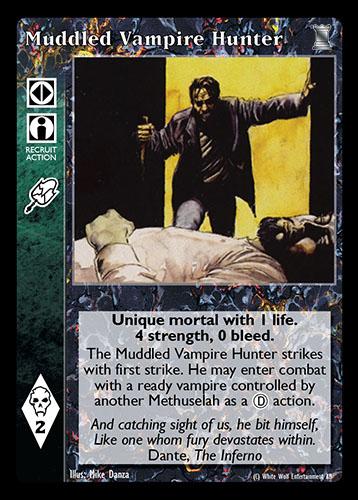 An excellent ally with good combat abilities at a reasonable price. He can help take down a cumbersome minion or deter an aggressive predator. 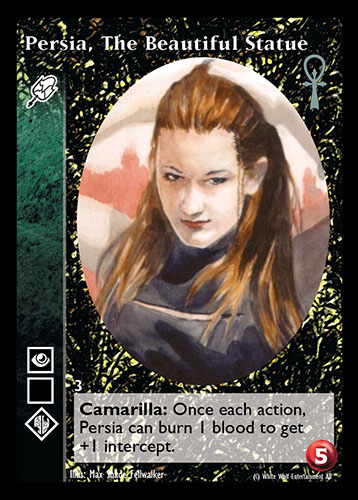 Eo for 5 pool in the group 3, combined with a nice ability. 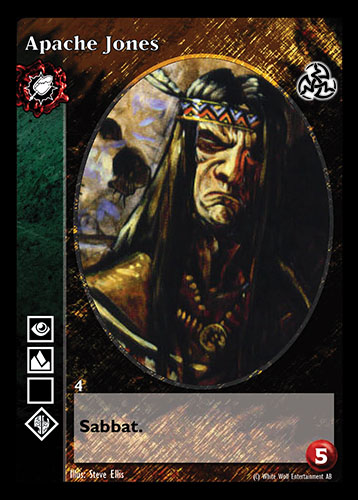 5 pool is a good price for the Eo combination. He is almost always paired with Uncle George and Persia in stealth & bleed decks. 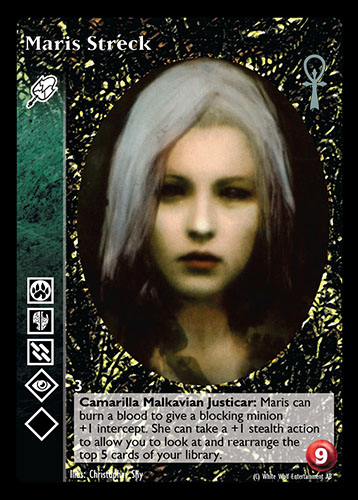 A Justicar with a very powerful ability she can use multiple times during an action. She gets included even in other clans crypts just for her ability and title. 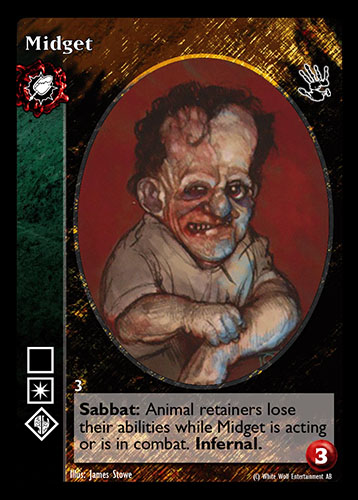 3 pool is a low price to pay for the Eo combination. Its Infernal trait is a bummer, but he is still excellent for stealth & bleed decks, where speed matters more than cost. It can also bloat with Kaymakli Fragment, which he can fetch with Sibyl's Tongue. 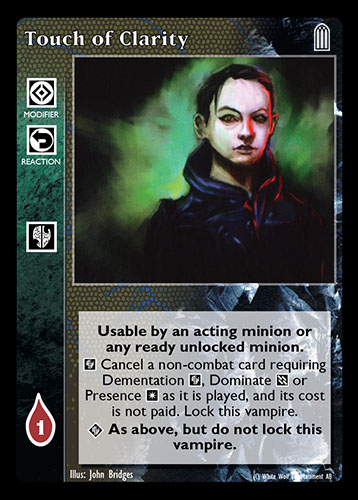 The only card in the game that can counter d bounces like Deflection: depending on the environment, it can be a powerful device in the e arsenal when used sparingly. 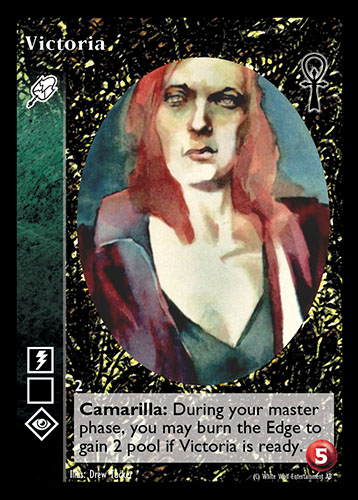 Superior A for 5 pool gets her included in many crypts, often when o or c can be used. Moreover, her ability makes for a nice bloat when she's combined with Madness Network. 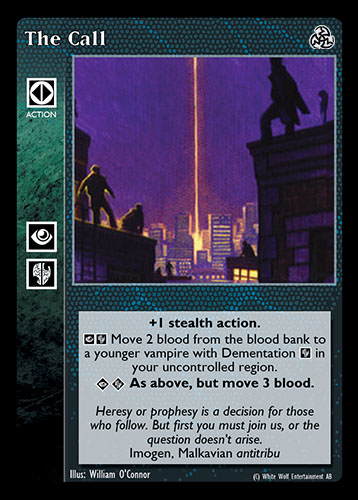 A strong bloat device that can help get vampires out faster, especially at superior EA. 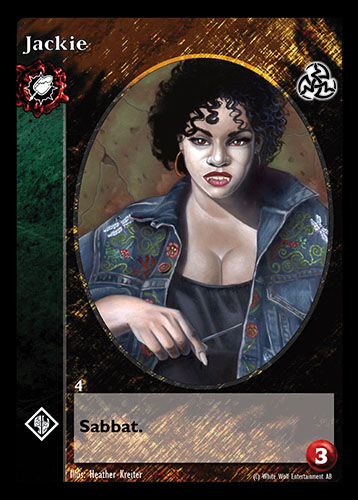 The cheapest E of the game at only 3 pool, she gets included in many e decks. 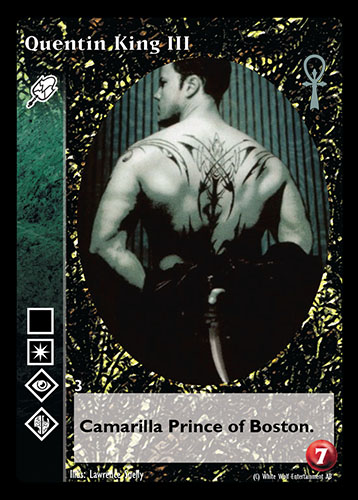 A Prince for 7 pool with a good disciplines combination. He is group 3, the same group as Maris Streck and is often included alongside her. The fact that he can use The Call and Madman's Quill is also a strong point. 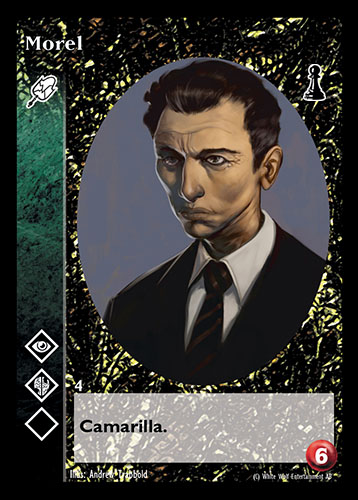 All clan disciplines at superior for just 6 pool, this is a bargain. 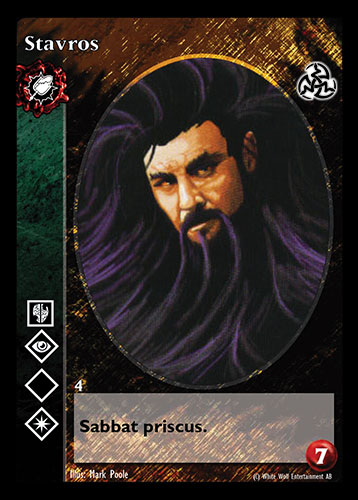 Although he does not have superior E, his superior R and title makes him a natural companion to Lutz von Hohenzollern in a political deck, or any OR political construct, for that matter. 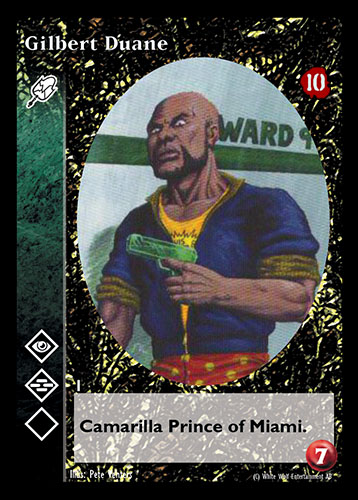 A prince for 7 and a very strong disciplines combination. He gets included in many Royalty decks. 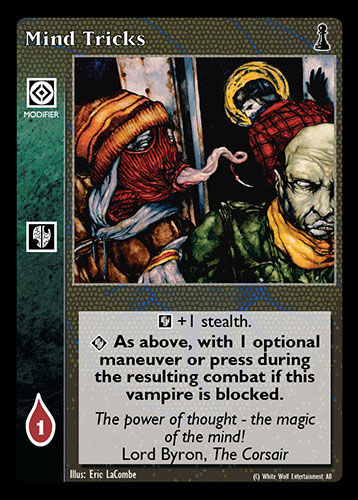 +1 stealth for 1 blood: this is expensive. It is included in decks where o is not much available. Alongside Deny and Confusion, it can make for a very decent stealth & bleed module using just the E discipline. 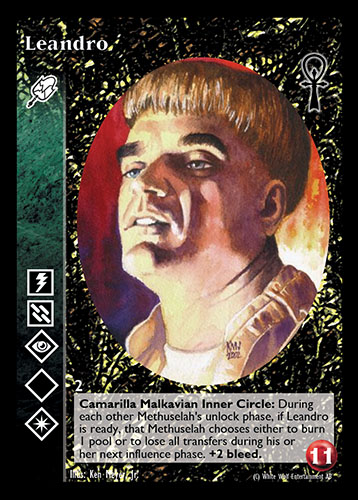 A strong Inner Circle with a good ability and Od, a good disciplines combination. He is seen in Malkavian Royalty builds but also in group 2 Inner Circle constructs like the Council of Doom archetype. 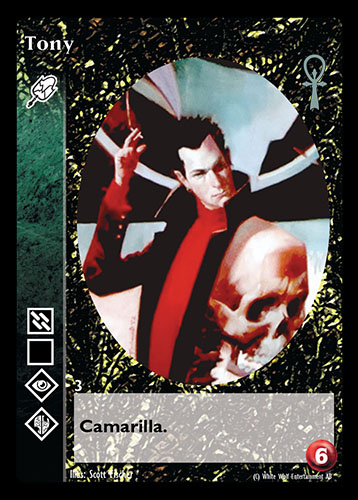 A good disciplines combination for 6. He can uses bounces, The Call and Madman's Quill, and superior E and inferior o is enough to be of use in a stealth & bleed deck. 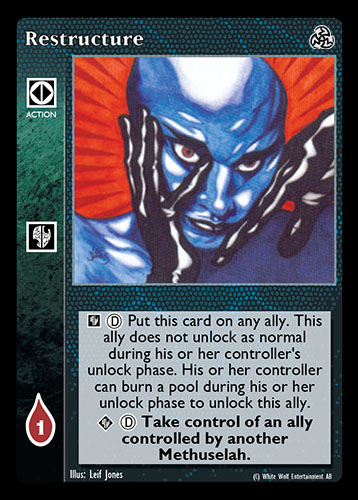 An excellent ally remover at superior E. It can get rid of the widespread Carlton Van Wyk and Ossian, who both become quickly problematic. 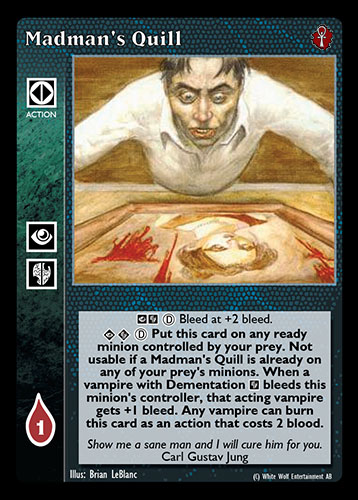 A bit pricey but its base effect can be worth it for a lunge. Its superior effect can get really efficient in some decks too. 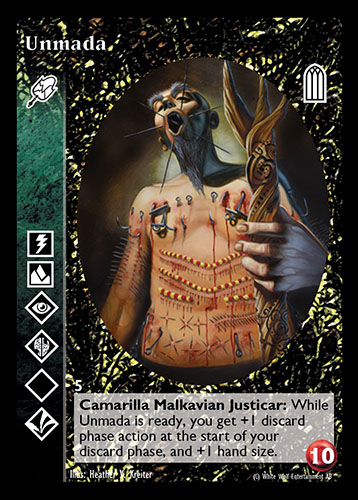 A strong ability for a Justicar, all for 9 pool. He is often seen in company with Lutz von Hohenzollern. 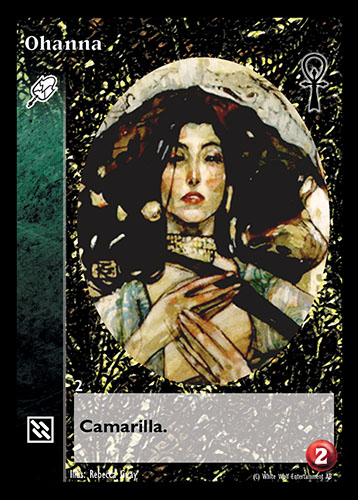 A really cheap 2 pool for d, she gets included in many crypts.