The Lasombra and their rare $ discipline are quite close to the Kiasyd S, but a little more played. They have given birth to the infamous Lasombra Nocturn archetype, one of the strongest stealth & bleed archetypes of the game using the D£ disciplines combination. They also can be used for political or even toolbox builds, but this is a rarer occurence. 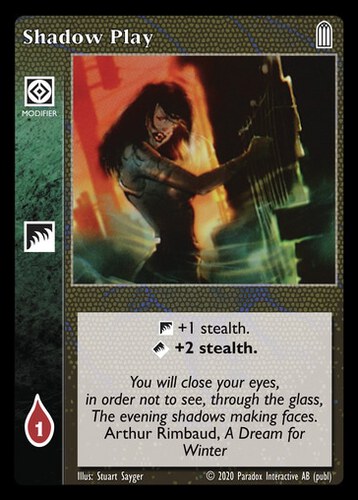 The strongest stealth for $, pricier than the o equivalents Lost in Crowds and Into Thin Air of course. 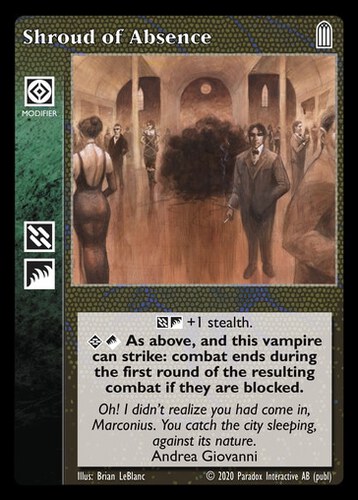 Another stealth modifier, this one at no cost. 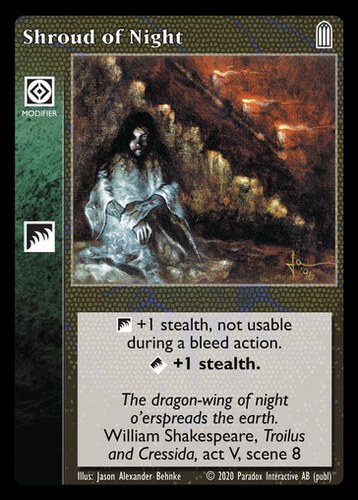 Yet another stealth enhancer, this one only really useful at superior £. 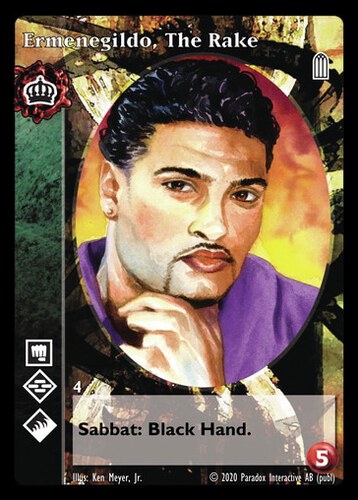 Only 5 pool for D£, plus he is Black Hand. He gets included in a lot of decks, Lasombra, Kiasyd S or Black Hand alike. 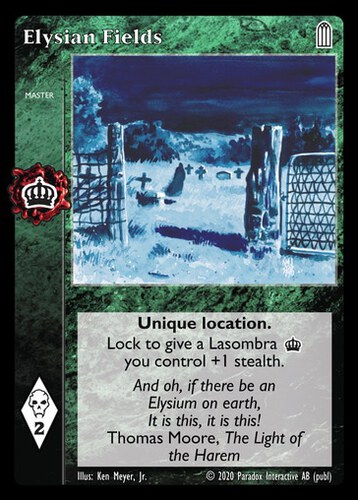 An excellent permanent stealth enhancer for a reasonable 2 pool cost. 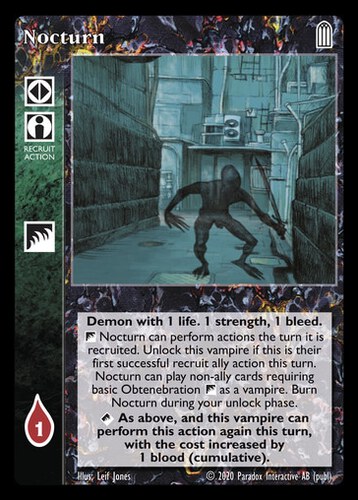 Although he lasts only one turn, he can either bleed for 1 or be kept for defence. Also, The Path of Night can be used to get him cheap and The Unmasking and FBI Special Affairs Division can be used to enhance him. 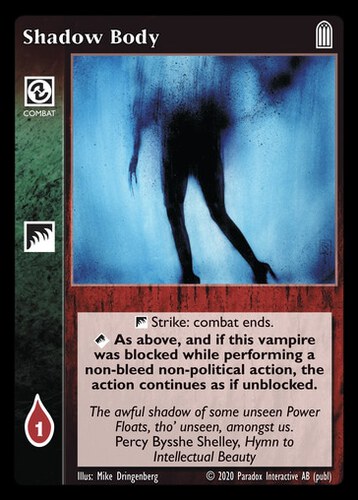 An excellent combat defence with the "combat ends" effect, it can also come in handy at superior £. This effect explains why it is often preferred to its alternative the Oubliette. 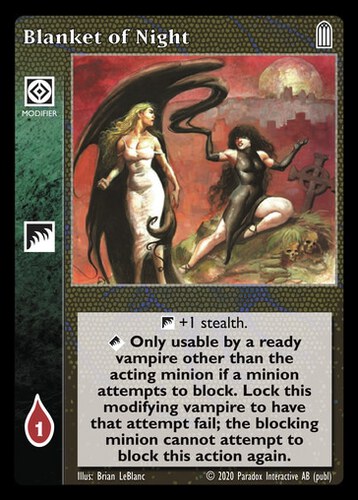 Yet another stealth enhancer, the superior £ effect can be a useful block denial, although locking two vampires to get a single action through is really expensive in terms of A&B. 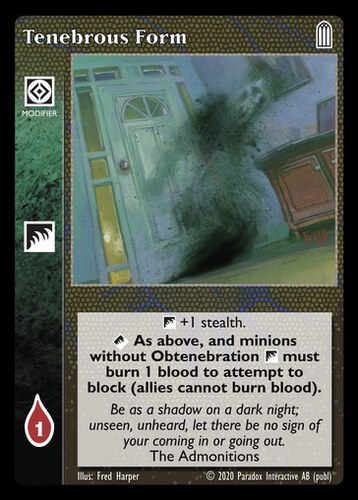 Completing the stealth arsenal of $, this one as a nice side-effect at superior £: it prevents allies to block the action, as they do not have blood to pay (and as it is not a card they use, cannot use life instead). 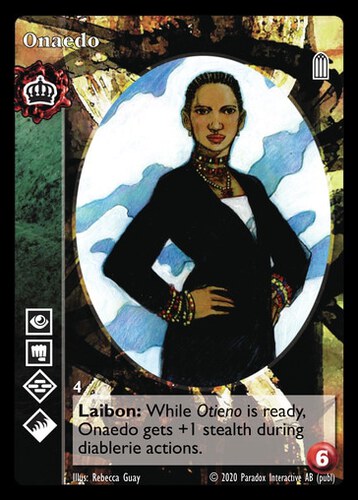 The precious £D combination for 6 pool, a common inclusion in Lasombra crypts. 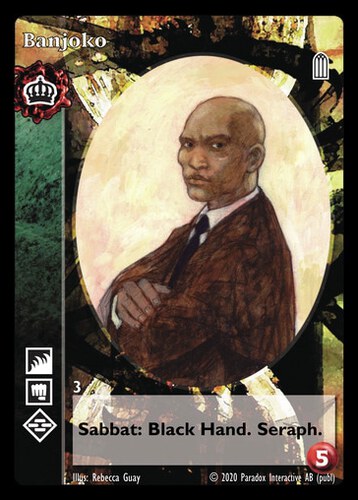 Superior D for 5 pool is already good, even with only inderior $. The Black Hand and Seraph traits can be useful, either as an enhancer when playing The Admonitions, or in full-fledged Black Hand constructs, where such a cheap Seraph really shines. 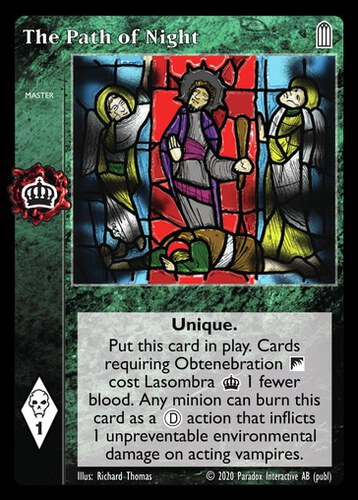 The Path of Night
played in 37 decks, typically 2-4 copies

Often used in $ heavy builds, as some $ stealth modifiers cost a blood. It becomes even more powerful when used in conjunction with some Nocturn. 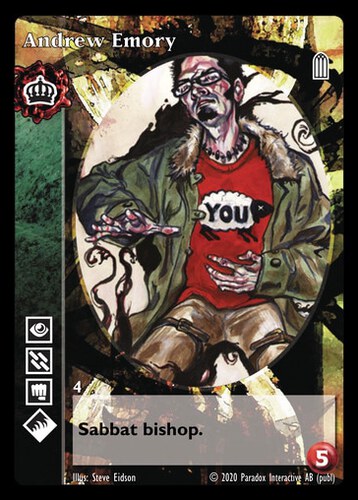 A nice £d combination for just 5 pool, he is often included in stealth & bleed decks.

He may be considered a bit pricey, but all clan disciplines at superior for 7 pool is really reasonable. 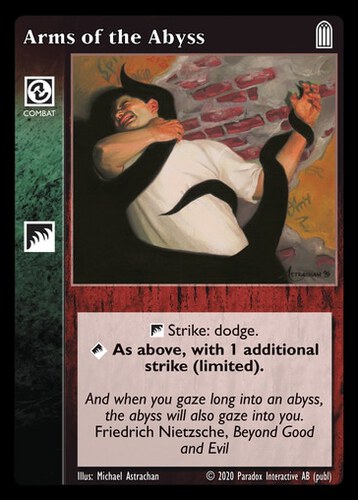 Arms of the Abyss
played in 31 decks, typically 2-7 copies

Although combat is rarely used in Lasombra builds, they still have the combat-oriented p discipline, and this dodge + additional strike combination can be very efficient. Combined with Entombment, it becomes frightening. 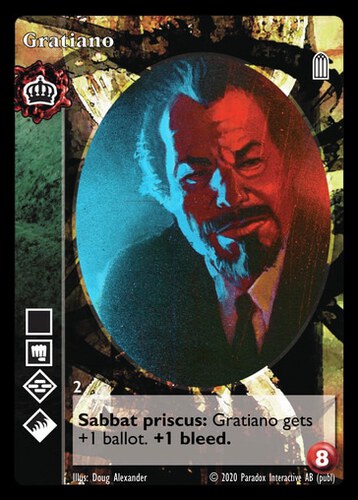 The bleed bonus along D£ is strong, and its unique Priscus ability means he will always provide 3 votes unless they are two other priscii on the table. All in all a rather strong combination for 8 pool.