Anarch have been on the rise the last few years, and they ramped up some classical archetypes to bring them to a new power level, like Saulot & Friends, Goratrix High Tower or Nananimalism, for example.

The anarch variation is a possibility for many archetypes, and it gives access to some unique cards. 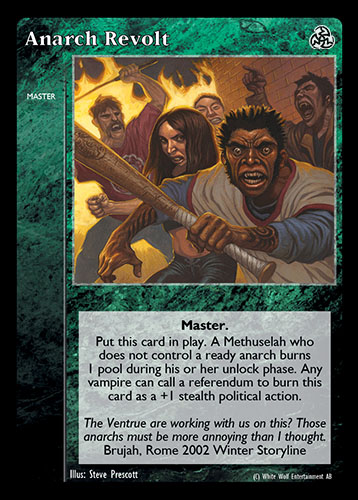 A good pool-damage dealer if it can be defended, either with intercept capacities or votes. 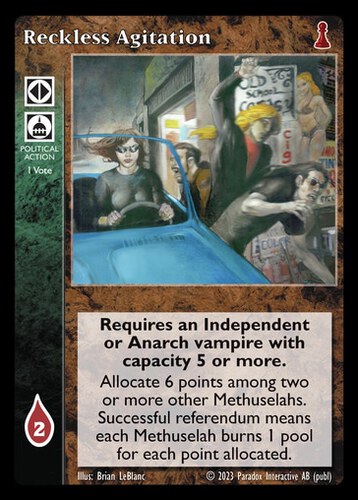 An excellent vote to deliver pool damage, its effect is strong than Kine Resources Contested, for a higher blood cost. It is a bit tricky to gather enough independant or anarch votes to get it through, but worth the effort. 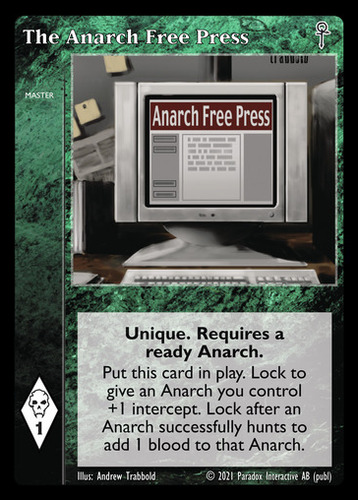 An excellent Master card, combining permanent intercept and the occasional blood bonus for the low cost of 1 pool. A no-brainer for most Anarch decks. 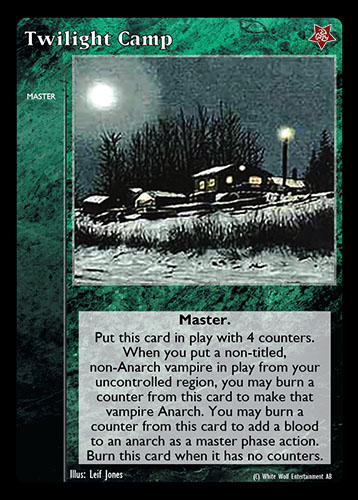 A versatile tool when playing a non-anarch crypt. It is the cheapest way to make a vampire anarch, although Anarch Convert and The Red Question are excellent alternatives, but it can also bring some welcome blood back on the table on occasions. 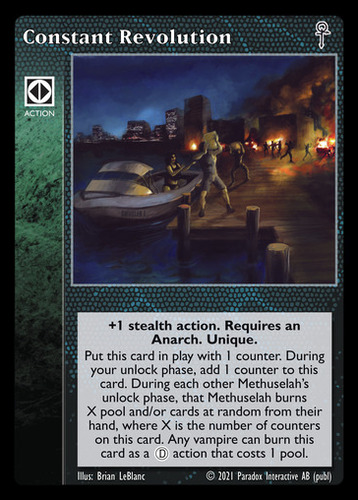 With an effect similar to Smiling Jack, they are most often played together for pool damage in decks that have enough block potential to defend it. 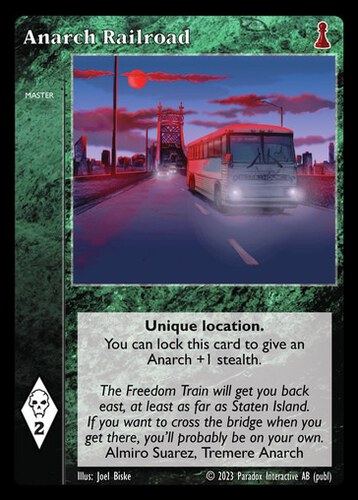 A decent source of stealth for a reasonable cost. 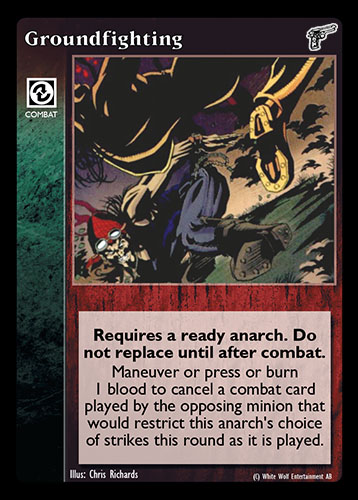 A very versatile combat utility, it finds it place in many Anarch decks with a combat module. The option to cancel an Immortal Grapple can be a life saver. 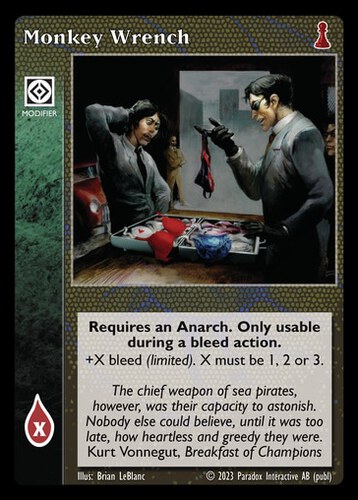 Although costly, it is a good bleed enhancer that requires no discipline. Invaluable in decks that have no access to other bleed enhancers, it can be a decisive tool for a lunge. 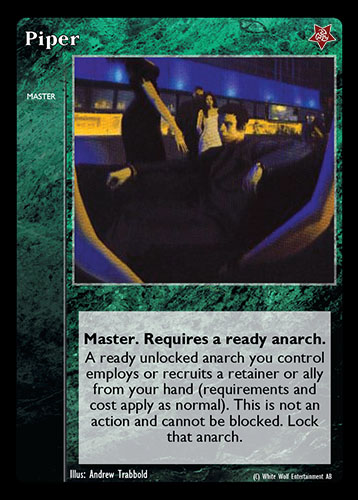 A unique effect that allows Anarch to recruit allies without the risk of being blocked, it can be used in ally-oriented archetypes like War Ghouls, Khazar's Diary or Nephandii. 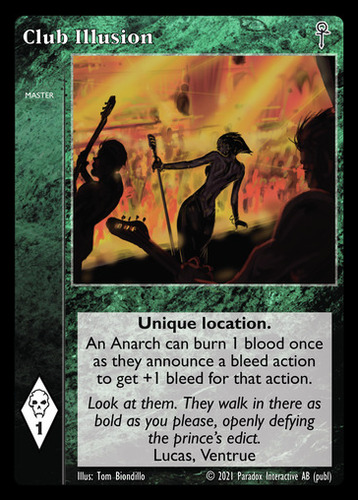 An excellent bleed enhancer, although the blood cost can be a bummer. Combined with cards that help bring some pool back on the vampires, like The Anarch Free Press and Twilight Camp, it becomes a frightening pool damage device. 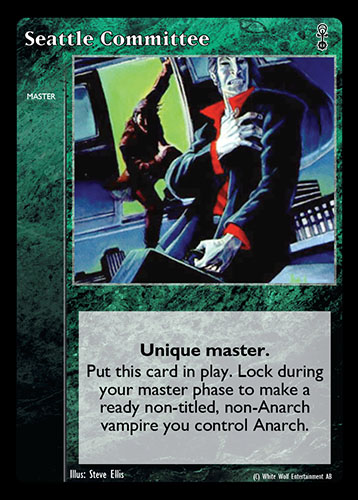 A nice way to make a vampire anarch at no cost, it is often played alongside Twilight Camp 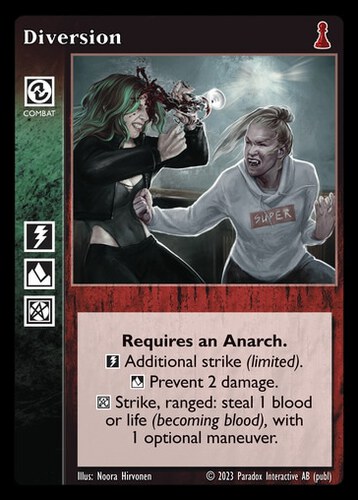 A versatile combat tool for vampires having both c and f, the choice between prevention and additional strike is a unique combination: it is unlikely to jam the hand and can help offensively or defensively depending on the situation. 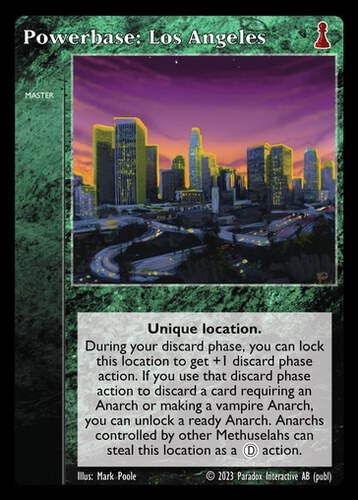 A decent rotation enhancer even without anarch cards, it becomes very useful if the unlock effect can be put to good use. 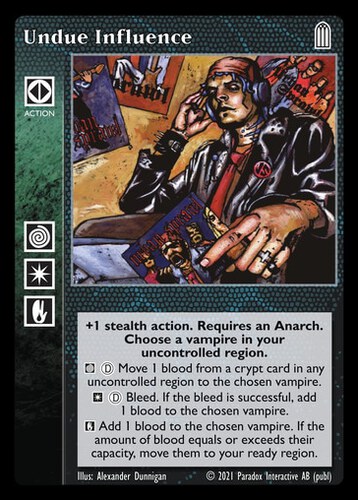 Although it provides no bleed bonus, having a stealthed bleed for r is a powerful tool, moreover when combined with Power of One to deliver a 2 stealth 2 pool bleed. The bloat effect is a nice bonus too. 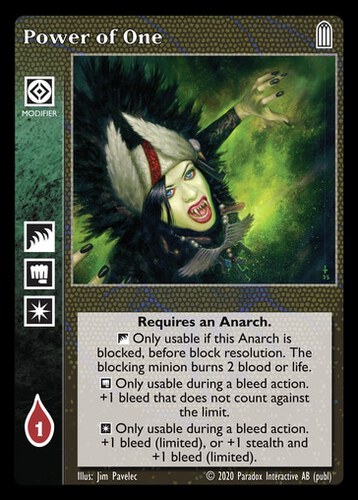 Power of One
played in 17 decks, typically 2-10 copies

Although pricier than Bonding, it provides stealth and bleed power at inferior r, which makes it usable by lower capacity vampires. 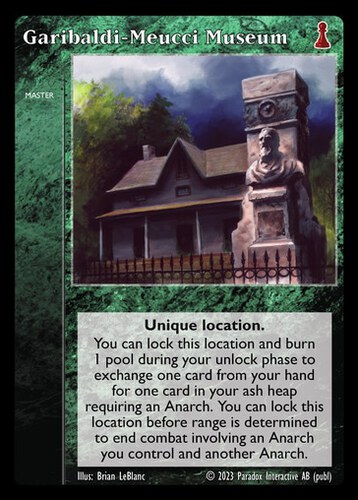 A decent recursion device, it is often seen in political decks, like Death Star, where it can be used to get back some critical pool damaging vote in hand.