The Imbued have a special place in the game: they are not vampires, but mortal allies. They are organised in creeds instead of clans, and have virtues instead of disciplines. Their bizarre handling and specific ruleset makes them unique, and they have given birth to their own Hunters archetype.

They have a unique access to Powers (an easy inclusion as they are fetched at +1 stealth with unlock) and Convictions cards (all three played in imbued decks as they stack and have no downside). 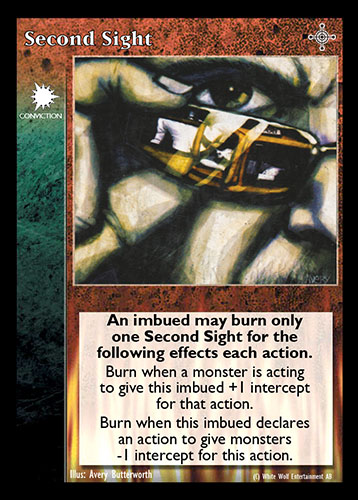 The most played Conviction. Usually all three Conviction cards are played in imbued decks, but Béatrice is often added to vampire crypts for additional bleed, and all she really needs is this Conviction for a bit of stealth. 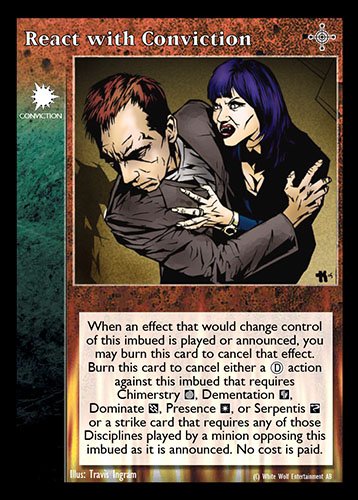 This is usually the first Conviction any Imbued fetches when he comes into play, as it protects them against anti-ally actions like Entrancement. 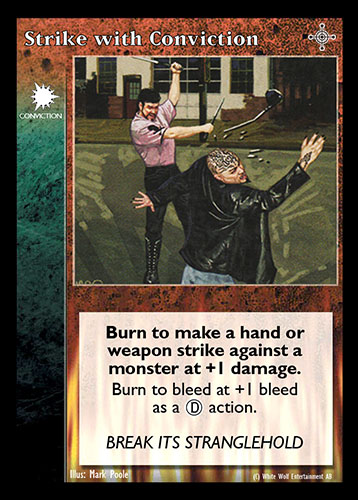 An excellent Conviction that boosts combat or bleed depending on the need. As it is a Conviction, it can be used every turn and come back into play during the unlock phase. 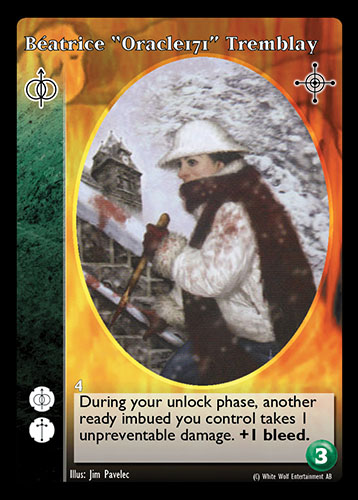 A good bleeding minion for just 3 pool, she gets included in vampire crypts to help with the bleed, as her ability makes her impractical in Imbued crypts. Helped by a Second Sight for stealth, she becomes an interesting minion. 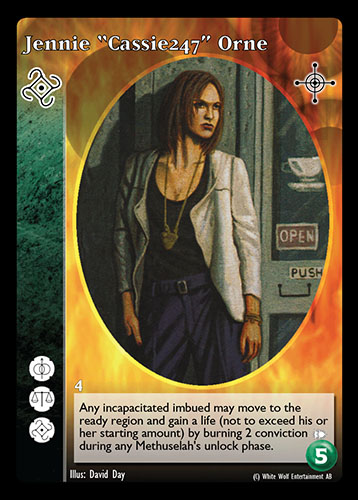 Her ability is the cornerstone of most Imbued decks. Not only can the Imbued come back from Incapacity (their version of torpor) with only two Convictions instead of three, they can also do so during any turn. As Imbued are fragile, this additional protection is welcome. 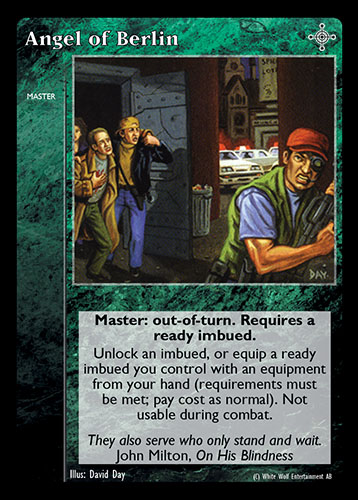 A versatile out-of-turn Master. It can be used as a wake, but also as a way to bring equipment into play without being blocked. As Imbued do not get so much stealth, this is a real asset to gear them up. 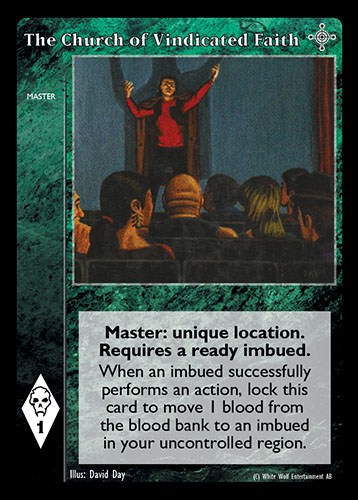 The Church of Vindicated Faith

A decent bloating device for Imbued decks, it is included in most of them, sometimes in multiple copies. 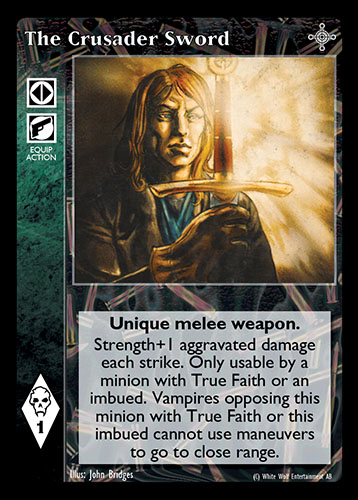 A powerful weapon only Imbued can wield. It gets included in most Imbued decks. 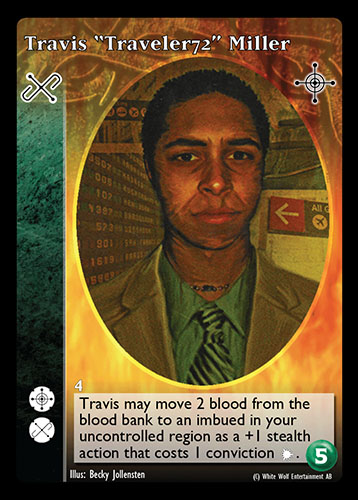 His virtues are useful and his ability is an excellent bloat device, so he gets included in many Imbued decks. 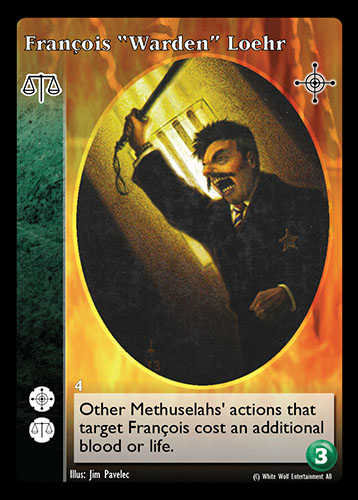 Good virtues for a decent price, his ability is also quite nice as it deters rush actions against him. 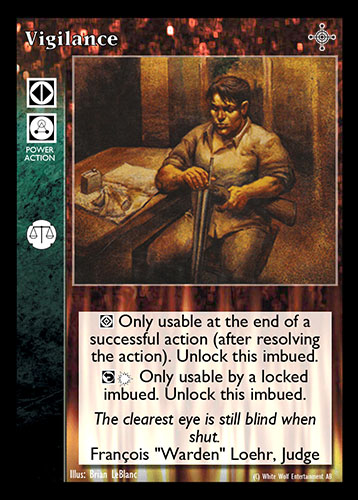 Jewel of the Justice virtue, the combination of drive and wake effects makes for a very nice bonus in A&B. 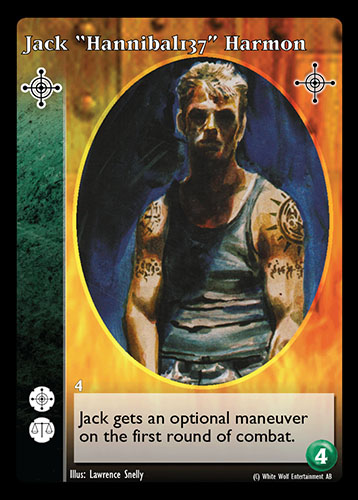 Excellent virtues with a good combat ability, he gets included in most Imbued decks. 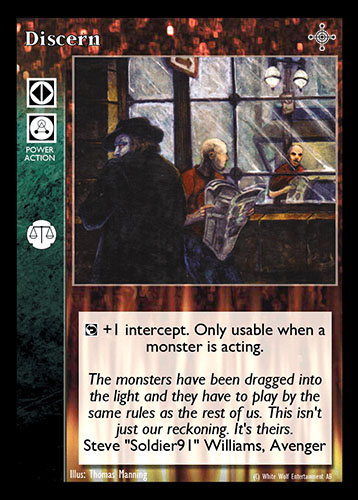 Second excellent Justice power after Vigilance, it explains why the Justice virtue is the most played among Imbued. Combined with The Unmasking, it transforms the Imbued in excellent blockers. 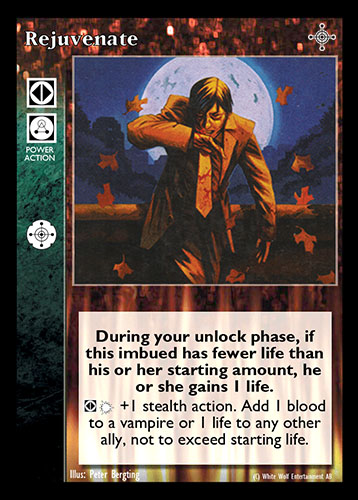 This regeneration ability makes any Imbued with the Defense virtue quite sturdy. As Imbued can not hunt, this is one of the few ways they can get some life back. 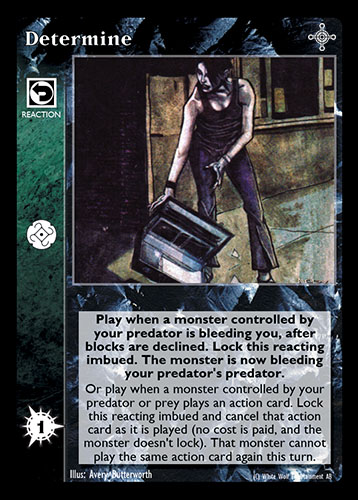 The only bounce Imbued can use against bleeds, it is easy to include as Jennie has the Visionary virtue. It can also be used to cancel an action on the prey side, so it is very versatile. 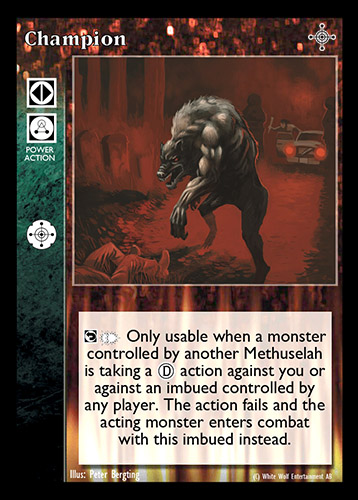 Another good Defense power, as it can be used to "block" bleeds without even needing intercept. The Conviction cost is a bit high, but the threat of it alone can slow down an aggressive predator.