Baali and their unique discipline y provide good clan cards. Their vampires are all Infernal, and 1 pool per turn is a high cost, but some of them, combined with the clan cards, have abilities matching this cost. There are multiple archetypes used by the Baali clan: 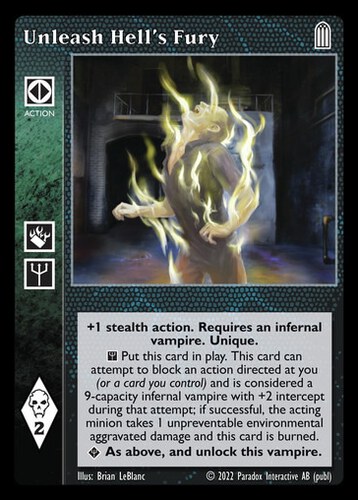 The most played y card. The pool cost is steep, but it is a dreadful defence. It can be used to deter bleeds or protect vampires against aggressive actions. The threat of torpor without even a combat is hard to get around. 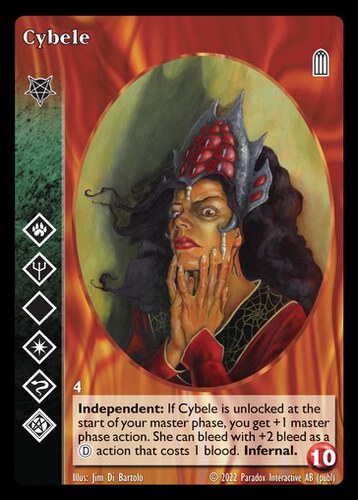 The star of the Baali clan, her ability led to Master-focused decks like Girls Will Find Inner Circle. 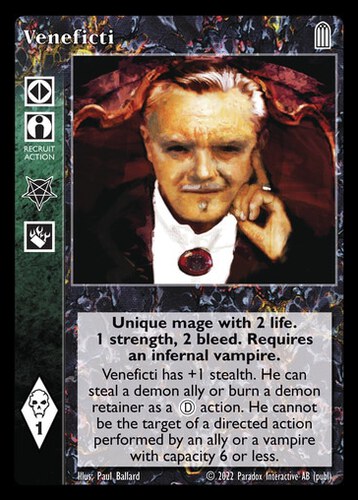 The best ally of the clan, Veneficti has a 2 points bleed combined with stealth, all for the cheap cost of 1 pool. Hard to resist: it is the kind of awesome cards one is paying the Infernal penalty for. 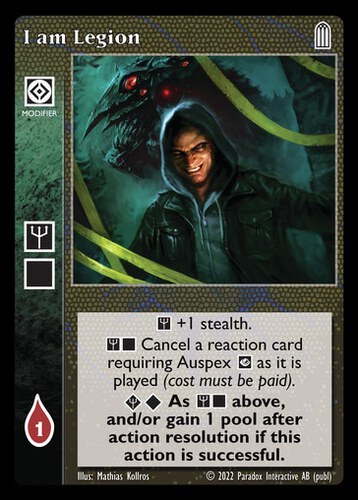 I am Legion
played in 54 decks, typically 1-4 copies

An excellent card against A bounces Telepathic Misdirection and My Enemy's Enemy, it does not jam the hand as it can be used at superior OY to just gain a pool for a blood (the card text states "and/or"). 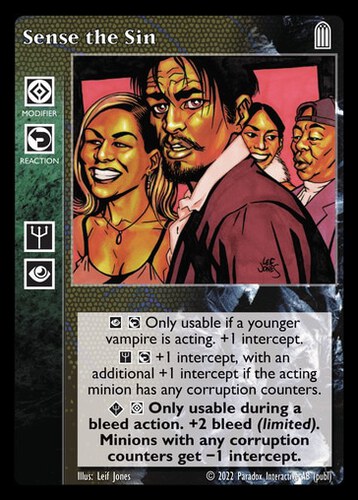 A very versatile card, it can be used for intercept or additional bleed, depending on the situation. Always useful, at no cost, even with no corruption counter around. 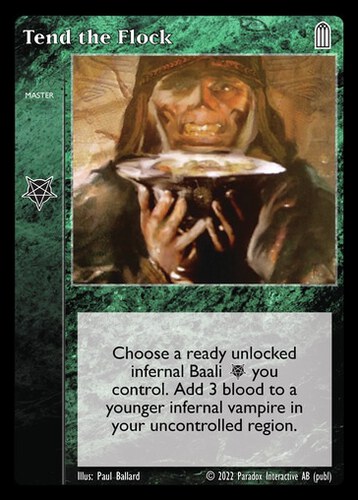 An excellent bloat device. Played in many Baali decks, it also plays well with Cybele ability. This card helps to make up for the Infernal penalty and is straightly better than Grooming the Protege. 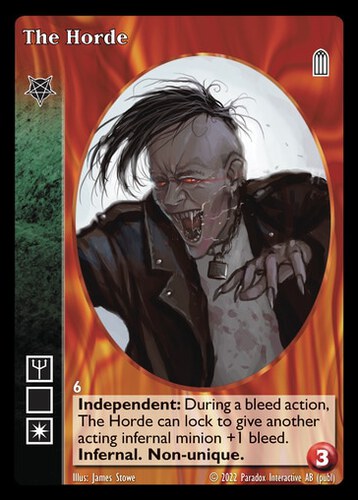 An excellent sidekick - its ability can be used to boost older vampires bleed easily, even from torpor. 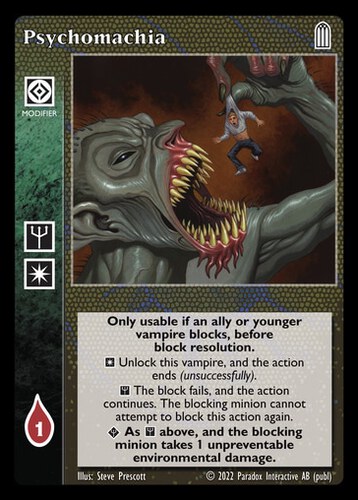 A decent block denial, although limited to younger vampires and allies, it still applies to a lot of minions when one plays Cybele or The unnamed. 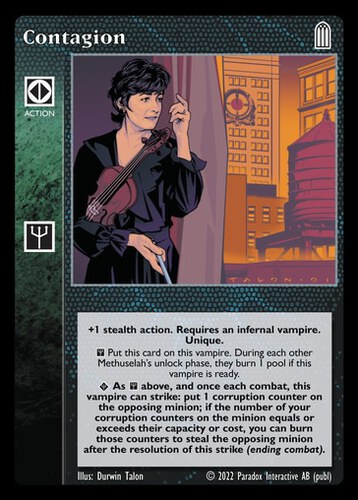 A decent pool damage provider, although often played as a single copy in Baali decks. It is a way to bring the pool cost around the table closer to the one one has to pay to unlock Infernal vampires, and is more useful in slow-paced decks. 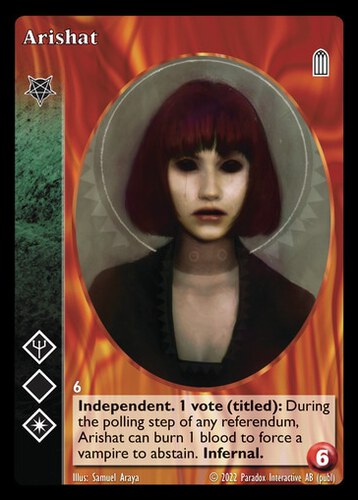 An excellent vampire, with an excellent ability for politics, defensively or offensively. Depending on the opposition, she can offer a swing from 1 to 4 votes reliably. 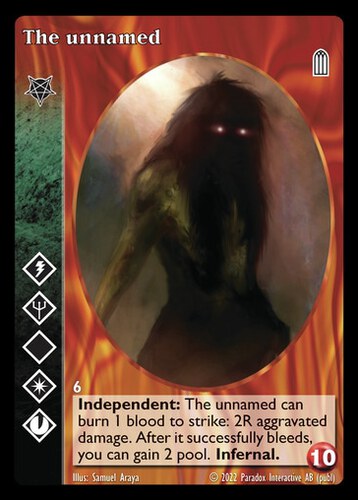 Star of his own archetype, his ability makes for a very comfortable bloat. His access to such a powerful disciplines combination allows him to use a broad range of cards. 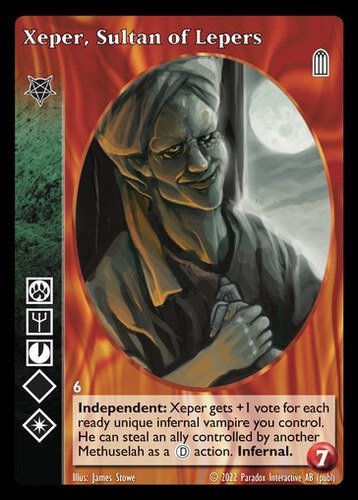 An excellent vampire, with a very annoying ability against ally constructs and a decent one for vote constructs. His inferior y is almost not an issue. 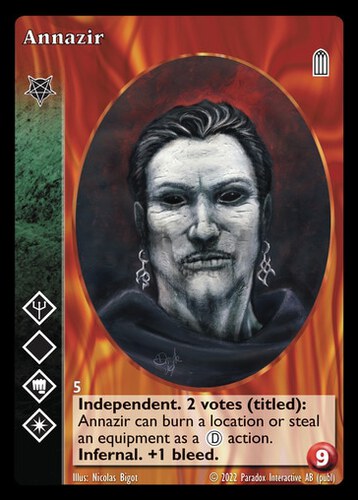 Another excellent vampire, all clan disciplines at superior, votes and enhanced bleed, plus a nice ability that can become useful to get rid of a gun or a Bowl of Convergence. 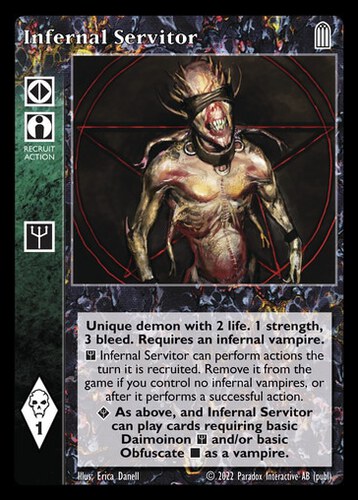 An excellent ally: although he does not stay in play, his bleed power is huge and can make for a very nice lunge. 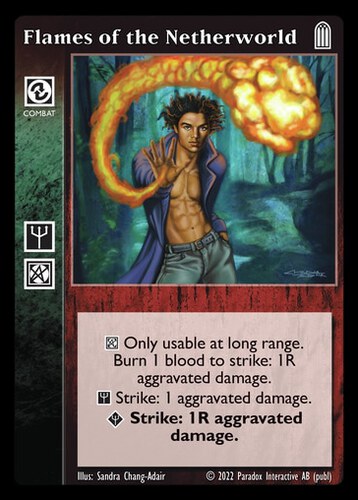 Flames of the Netherworld
played in 16 decks, typically 1-4 copies

A very good combat strike. More often seen in fact in Tremere u decks using t, as it is a good alternative to other aggravated damage source t provides like Walk of Flame or Burst of Sunlight. 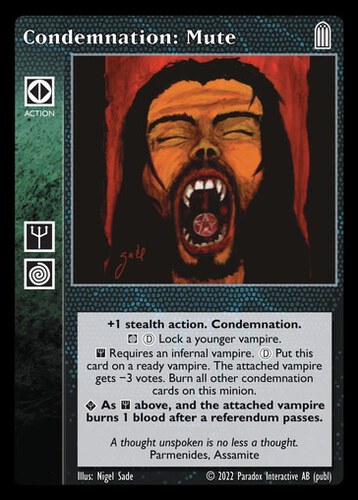 An excellent card for politics, both defensively and offensively. Even Baali decks with no take on the politics game can play it just to hinder a politic opponent.