The Game of the Game
By Mark Loughman 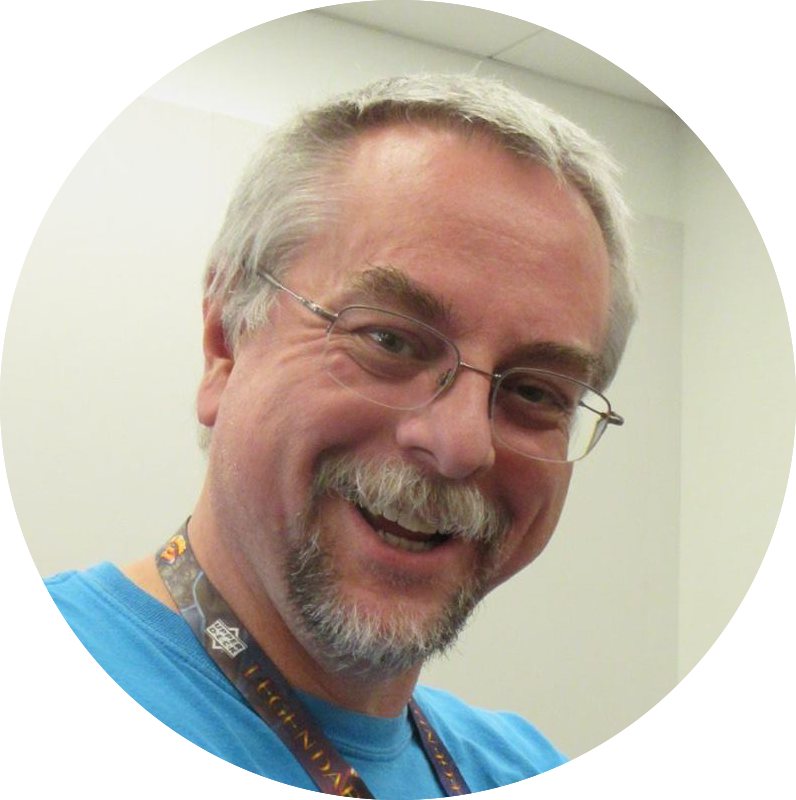 Mark Loughman has been playing V:tES since day one, is highly seated in the VEKN Hall of Fame with 25 tournament victories, and became US National Coordinator in 2019. He organises 4 tournaments per year and playtests new extensions. His favorite decks are Tremere u and Nosferatu s Toolboxes.

At a certain level, V:tES is an elaborate game of Paper-Rock-Scissors. Do I have enough stealth to deliver my payload? Is S:CE enough to keep my minions above ground? The rich complexity of the game is what keeps my interest, but it can also be quite frustrating. I often suggest to new players that once they have the mechanics of the game down, they should look over the TWDA and find a deck that has had success and try building and playing a version of it. Perhaps start card-for-card, and then modifying it as they start to find their own style of play. While this can be a useful exercise, sometimes the new player will come back to me frustrated. « How did they win with this deck? It sucks! » Demonstrably it does not suck, it is in the TWDA. What this does demonstrate is the effect of the meta-game.

In some regions, 2 stealth is king, in others you cannot hunt without a Forgotten Labyrinth. If you can hone in on the meta-game, you can make better choices and expect to be more competitive.

What is the meta-game?

Most players have a regular play-group. Members of that group will have decks that they play more often than others. Over time, the Darwinian pressure to compete among one’s peers will lead to modifications to one’s decks or perhaps entirely new deck designs. This is the first step in the meta-game.

It begins with a vision of how to inflict your will on your opponent. « I shall bleed for 3 », you decide. Your prey attempts to block. Do you play stealth? Do you begin playing combat cards? The meta-game you are playing in will often shape this. If your first thought is stealth, then before long your opponents will begin playing more reaction cards, either intercept or bounce. If they intend to block, they may begin to add more combat cards to punish your transgressions. As Newton teaches us, for every action, there is a reaction. Your meta-game evolves.

In general terms, as it seems that successful stealth-bleed decks lead to a response of more intercept. As the meta becomes more blocky, players will respond with The Kiss of Ra and more combat, or huge voting minions who play several modifiers on each action. Block denial cards like Daring the Dawn or Elder Impersonation have a place here. This leads to a much smaller action space, which often allows weenie decks to spawn a swarm of minions. Is there anything more will-sapping than an !Toreador g breed/boon deck with 10 minions and 30 pool? Heavy combat is also a logical response to big voters. This is by no means a linear development, as hybrid decks will combine aspects of any of the above. The Toolbox comes out of this evolution. These benefit the most from a good read of the meta-game, allowing you to cycle from offense to defense as you play your cards. When it works, it is glorious! When it does not, it can be embarrassing.

The wheel turns. My local playgroup slowly rotated through these permutations from Jyhad through White Wolf assuming control of the game and establishing a tournament presence. The effects were profound.

Let’s take a look at a recent addition to the TWDA, the Emerald Legionnaire. The addition of this one card allowed a previously weak clan to compete at the highest level. During playtest, I had success with a grindy FA concept that slowly added bleed pressure as Legionnaires accumulated. Once they hit wide release, other players sought to flood the board with a horde of them to swarm their prey. If we are expecting to face something like this in an upcoming tournament, how might we prepare for it?

One needn’t make a new deck just to deal with the possibility of facing this archetype, but one could make certain to add one of these elements to an existing deck to allow for the ability to counter it. Personally, I have changed the mix in all of my political decks to include 2 Ancilla Empowerment and 2 Anarchist Uprising, usually replacing Kine Resources Contested.

With a wider field to play against, local and regional playgroups began to compete with each other. New releases meant new cards and new combinations that shook things up. The internet allowed for these new ideas to travel quickly. The pace of change accelerated significantly. What is a Methuselah to do to stay ahead of this curve? That depends on where you are planning on competing.

When preparing for a tournament, it is important to have some idea of who you will be playing against. If it is your local playgroup, you should have a pretty good idea of the players and their go-to decks. While I always recommend playing a deck you are comfortable with, your expectations of the other players should give you insight as to whether to play Deck A or Deck B. If your read on the field does not cause you to switch decks, then it might convince you to swap a few cards around to help cope with anticipated problems. Adding a Secure Haven to Arika can thwart a Tupdog.

When discussing deck selection, the esteemed Jay Kristoff once told me to pick a deck I don’t mind staring at for 4-8 hours. We play for enjoyment. If you play a deck simply because it is the ‘best’ deck it will not be as satisfying when it wins and will be demoralizing when it loses. Instead, play something you will enjoy, but be open to modifying to fit the anticipated environment. « Do I have enough stealth? » « Will they have Grapple against my S:CE? » If you are unsure, perhaps increase your ability to cycle cards, whether with Dreams of the Sphinx, Aura Reading, or Lupine Assault.

If you are traveling, or are expecting a significant presence of out-of-towners, it might be a good idea to see if any notable players involved have decks published. While they may not be playing them, this may give you an idea of their style of play. If they are known for political decks, adding a few more Delaying Tactics might go a long way. Also, as you play more events you will meet more players. Keeping in contact may allow you some insight as to what they are seeing.

Style of play can often drive the meta-game. We play for enjoyment, and while winning feels good, we also want to enjoy the process. In a tournament environment you will be playing the same deck for several hours, and as such, if you do not find some aspect of it aesthetically pleasing, you will be less likely to play it, or even stick with competitive play. Most casual players, in my experience, are driven by some element of the game other than the latest trends in the TWDA, whether it is due to a particular artist or an association with some part of the RPG. My first deck back in 1994 was a Gangrel/Garou deck that used the vampires to generate Garou and little else. Newark, Ohio players have a reputation for playing combat decks, perhaps this is where it comes from.

For me, the meta-game becomes most relevant each Spring. I try to cut off new deck construction in March and begin refining decks in preparation for the NAC. I scan the TWDA for new additions,particularly looking for any new entries from Hugh Angseesing and Martin Weinmayer. Ignore them at your peril! I also try to pick the brain of Darby Keeney, a good friend and Evil Genius, to see what is on his radar. My plan every June is to have 12 decks ready to take to the Week of Nightmares (WoN) and North American Championship (NAC).

The meta-game plays out in real time during the WoN. Do I hold off on my best deck until the actual NAC? Is it worth risking showing my tech to get a feel for how it will do by playing it early in the WoN? I try to see as many decks from as many players as I can as the week goes on, hoping to get a feel for the field. Stealth vs Intercept. Combat vs avoidance. If I make Day 2, do I switch decks?

The correct answer is often a moving target.